LAHORE: A team of the Evacuee Trust Property Board (ETPB) has retrieved the possession of Valmiki Mandir near Neela Gumbad from land grabbers after a lengthy court battle.

The Valmiki Mandir is stated to be 1,200 years old worship place. Around 20 years ago, a Christian family, which claims to be converted Hindu, started facilitating the Hindus at the temple. Later, the family claiming to be of Hindu’s Valmiki faction gradually started squeezing the worship-related activities by limiting these for the Valmiki Hindus. Since the Waqf properties of Sikhs and Hindus are owned by the state of Pakistan and this temple’s land too was also transferred to the ETPB in the revenue record, the family in 2010-2011, claiming to be the owner of the property, filed a case in the civil court, the ETPB additional secretary (shrines) told Dawn.

He said besides going into litigation, the family also made the temple only for the Valmiki Hindus. This left the trust with no option but to fight the case in court. A couple of days ago, the court admitted the ETPB as the sole owner of the property.

According to a spokesman for the ETPB, in the near past, a one-man commission constituted by the Supreme Court of Pakistan also presented its recommendations to the government, stating that the temple must be renovated to provide better workshop facilities to the Hindu community.

“But the ETPB, in the wake of the litigation, was unable to start restoration work at the Mandir constructed on over 10 marla land worth millions for being situated in the heart of the city,” the spokesperson added. He said the renovation/restoration of the Valmiki Mandir would start soon.

The ETPB looks after 200 gurdwaras and 150 mandir temples across the country. It has also decided to prepare master plans of major gurdwaras and temples in collaboration with the National College of Arts, Walled City of Lahore Authority and Archeology Department.

The plans will allow the ETPB to control haphazard or ill-planned development within and out of gurdwaras and temples. Initially, according to the scheme, the management will get plans prepared for major gurdwaras – Nankana Sahib, Nawab Sahib (Lahore), Rohri Sahib (Aimanabad), Panja Sahib, Krishna Mandir, Katas Raj Mandir and some other places. And after taking over possession, the ETPB is likely to make a master plan of the Valmiki temple for its restoration works. The trust also intends to engage the tourism department to make efforts to promote religious tourism, enabling our youth to know about their heritage. 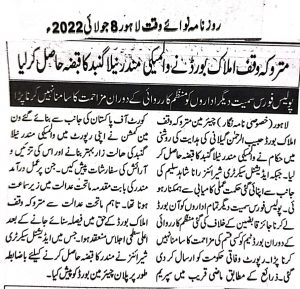 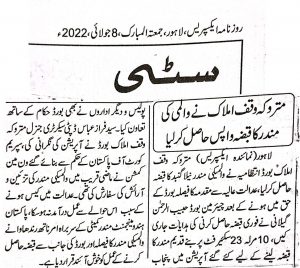