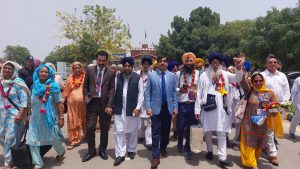 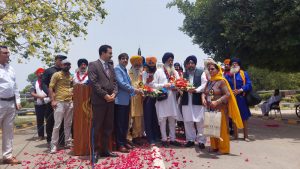 The Sikhs from across the country and abroad gather at Gurdwara Punja Sahib, the third holiest site in the Sikh religion, to mark Shaheedi Jorr Mela, on the 416th death anniversary of their fifth guru, Guru Arjan Dev Ji.

ETPB Chairman Habibur Rehman Gilani said that the Pakistan Sikh Gurdwara Parbandhak Committee would organise the religious rituals according to the schedule, while the government was responsible for the security of the pilgrims.

Sikh pilgrims’ leader Sardar Sikhmandir Singh says Pakistan is their second home and no one can stop them from visiting the country.

“We come here to attend our religious ceremonies as it is the land of our Gurus,” he says.

The pilgrims will leave for Hassanabdal by train to attend ceremonies at the Gurdwara Punja Sahib. They will visit Nankana Sahib on June 10 to visit Gurdwara Sacha Sauda.

They will return to Lahore on June 13 from Nankana Sahib and visit Gurdwara Darbar Sahib at Kartarpur on June 15.

The central ceremony will be held at Gurdwara Dera Sahib on June 16 after which the pilgrims will return to India on June 17.